Despite pneumonia's best efforts, I am still alive, and shall be getting back to blogging about cricket soon.

If you'd like to read my ramblings on football/soccer (specifically Aston Villa) you can now read them at 7500 to Holte.  And remember to support my campaign to become Australian wicketkeeper. 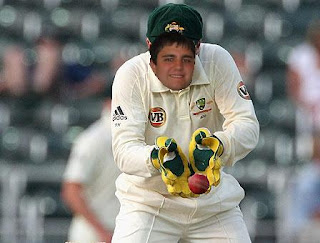 Me for Australian Wicketkeeper

It's time for Brad Haddin to go.

Tim Paine is injured, and the selectors seemingly don't want to play Matt Wade in test cricket yet.

So, I am going to offer my services.

I'm actually American though, and the never having played an actual match of cricket may be a problem.  I do, however, have a knack for catching important things before they hit the ground.  I also used to play baseball and know how to hit things with a bat.  I wasn't very good though, which is another problem.  I'm done with my college finals on the 16th.  This gives me plenty of time to get to Australia in time for the Boxing Day test, and learn how to play.

So come on selectors, I'm ready to represent my* country.

Luckily I was not watching Australia manage to completely lose their minds the other day, as I was in class during that debacle.  After a few days of avoiding mainstream cricket media, I finally had a gander at the highlights and I would like to give some quick thoughts.

It didn't take much for me to become an Australia fan.

The past few weeks in the life of an American cricket fan have been both great and disappointing.

Great for just the sheer amount of international cricket that has been on recently.

Disappointing for the fact that they've all been on at kind of bad times.

I can catch the end of the Australian-South Africa, Zimbabwe-New Zealand, and India-England matches, but I've been in classes for the most part.  I can watch the beginning of the West Indies-Bangladesh test days, while Pakistan-Sri Lanka is pretty much out of the question.

As frustrating as that is, that's kind of the problem with trying to watch this wonderful sport in America.

I'll be able to watch pretty much all of the Australia home tests, but other than that, almost everything is either too late, too early, or when I have class.

The ball-by-ball live text from Cricinfo and the like is a life saver.

As much as I would like to wake up early to watch the Australia-South Africa tests, it's just not feasable for me. That's no fun.

I meant to write a post about the Twenty20 Champions League, but I forgot to when it was still going on.  But here's my feelings: zzzzzzzzzzzzzzzzzzzzzzzzzz.  So lets move on to more Cricinfo pictures.

Email ThisBlogThis!Share to TwitterShare to FacebookShare to Pinterest
Labels: This Week in Cricinfo Pictures

This Week in Cricinfo Pictures

I've pointed out before that Cricinfo has some rather amusing pictures on it.  So I've decided to start a (hopefully) weekly feature on the blog called 'This Week in Cricinfo Pictures'.